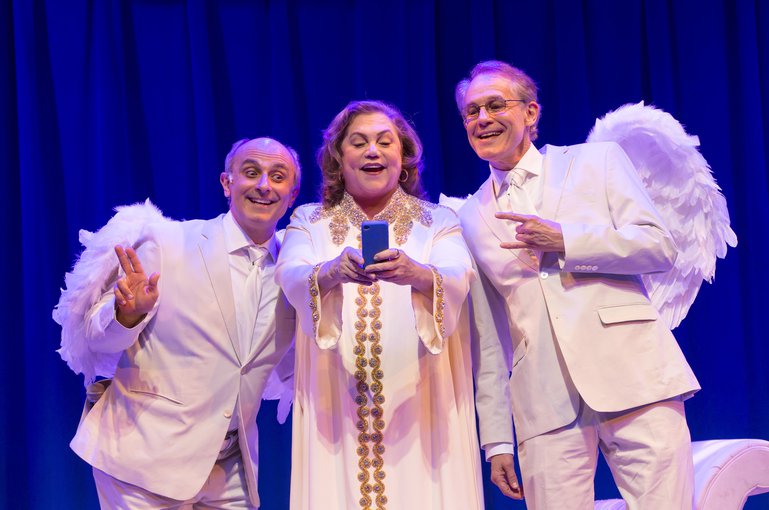 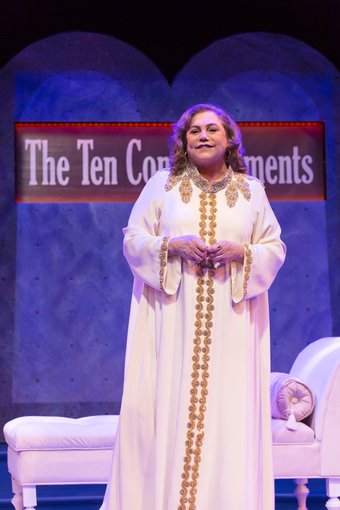 Kathleen Turner in An Act of God 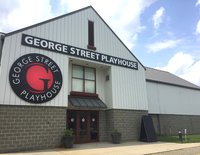 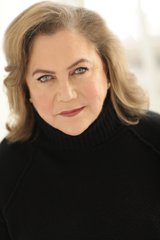 Kathleen Turner(God) has garnered critical acclaim for her performances in movies including Body Heat, for which she was nominated for a Golden Globe; Romancing The Stone and Prizzi's Honor, which earned her a Golden Globe Award for each; Peggy Sue Got Married, which brought Turner both an Academy Award nomination and a Golden Globe nomination; and War of the Roses, and yet another Golden Globe nomination.  Turner's extensive film credits also include The Man with Two Brains, with Steve Martin; Jewel of the Nile, with Michael Douglas; The Accidental Tourist; V.I. Warshawski; John Waters' Serial Mom; Naked in New York; Moonlight and Valentino; The Real Blonde; and Sofia Coppola’s The Virgin Suicides.  Ms. Turner has also starred on Broadway in Cat On a Hot Tin Roof, for which she received a Tony nomination for Best Actress; Indiscretions; The Graduate; and Who’s Afraid of Virginia Woolf, for which she received a second Tony nomination for Best Actress. More recently, Ms. Turner had a major recurring role playing the role of Sue Collini on Showtime’s hit series, Californication as well as the starring role in an independent film called The Perfect Family.  On stage, Ms Turner starred as Molly Ivins in Red Hot Patriot: The Kick Ass Wit of Molly Ivins at Philadelphia Theater Center, Berkeley Rep, The Geffen in LA and Arena Stage in DC.  She also starred on Broadway as a nun in High and took the show on tour in 2011 and 2012.  Her film, Dumb & Dumber To with Jim Carrey and Jeff Daniels was in theaters in 2014. In 2015, she starred opposite Ian McDiarmid in Bakersfield Mist in the West End.  Last year, she was back at Arena Stage performing in Joan Didion’s The Year of Magical Thinking . Ms. Turner has recently expanded her repertoire with the development of her first cabaret performance, Finding My Voice, which debuted in Philadelphia in Fall of 2017 and will continue in selected cities across the country. In addition to her film and stage credits, Turner wrote of her many accomplishments and life experiences in her 2008 autobiography titled Send Yourself Roses: Thoughts on my Life, Love, and Leading Roles, which secured a position on The New York Times Best-Seller List and which she recently recorded as an audio book. Ms. Turner also finds teaching rewarding. 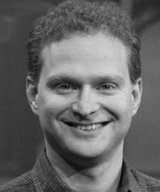 David Javerbaum(Playwright) is an American comedy writer and currently an Executive Producer for Fusion Network to oversee development of a news satire block of programming. As the former Executive Producer of Comedy Central’s The Daily Show with Jon Stewart, his work for that program, including four years as Head Writer, has earned him 11 Emmys, two additional Emmy nominations, two Peabody Awards, and Television Critics Awards for both Best Comedy and Best News Show. He is one of the primary authors of the show’s textbook parody America (The Book), which sold over 2.5 million copies, spent a year on The New York Times Bestseller List (including 15 weeks at #1), won the James Thurber Prize for American Humor (his second), won the 2005 Quill Awards for Best Humor Book and Audiobook, and was named Publishers’ Weekly’s 2004 Book of the Year; the audiobook won a Grammy Award for Best Comedy Album. The book’s sequel, Earth: A Visitor’s Guide to the Human Race was released in September 2010. He was also Emmy-nominated for his work as a writer for The Late Show with David Letterman and wrote for the 2006 Academy Awards. He spent three years writing for the satirical newspaper and website The Onion, conceiving its 1999 New York Times #1 bestseller Our Dumb Century and contributing numerous articles to it and two other Onion books. His first book as sole author, What to Expect When You’re Expected was published by Random House in 2009. In 2011, his book The Last Testament: A Memoir by God, was published by Simon & Schuster, and his affiliated Twitter account @TheTweetOfGod has over 2.5 million followers. 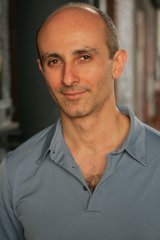 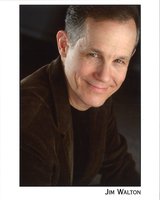 Jim Walton(Gabriel) At GSP: Souvenir, The Fabulous Lipitones. Broadway: Merrily We Roll Along, 42nd Street, Sweeney Todd, The Music Man, On the 20th Century, She Loves Me and Sunset Boulevard. Off-Broadway: And the World Goes ‘Round, Scrambled Feet and Closer Than Ever. On PBS: Follies: In Concert, Crazy For You, Sondheim! The Birthday Concert and Company. With his brother, Bob Walton, he wrote book, music and lyrics for Mid-life! (The Crisis Musical), Mid-life 2 (#WhatDidIComeInHereFor?) and Double Trouble (A Musical Tour de Farce), all licensed through R&H Theatricals. Film: Best Worst Thing That Ever Could Have Happened. Hometown: Marion, Indiana. College: University of Cincinnati’s College-Conservatory of Music. midlifethecrisismusical.com

From the mind of 13-time Emmy Award winner David Javerbaum, former head writer and executive producer of 'The Daily Show with Jon Stewart'

Following Her recent sold-out Broadway run, God arrives in New Brunswick — and she looks a lot like Kathleen Turner! Called “deliriously funny” by The New York Times, God takes human form in An Act of God and doesn’t hold back about what She’s seen and heard. In this hilarious comedy by Emmy Award-winner David Javerbaum (The Daily Show with Jon Stewart), God, along with two archangels (Stephen DeRosa and Jim Walton), answers many of the deepest (and not so deep) questions that have plagued mankind since Creation.

It's a laugh a minute.

News & Reviews for "An Act of God" 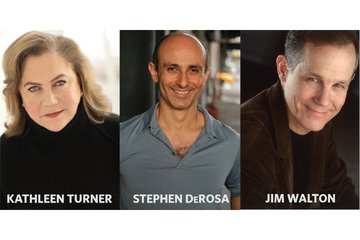 Stage and screen legend Kathleen Turner will be to be joined by Broadway’s Stephen DeRosa and Jim Walton in "An Act of God" at George Street Playhouse, Nov. 28-Dec. 23, 2017. DeRosa (Broadway’s "Into the Woods") and Walton (Broadway’s "She Loves Me") return to George Street as archangels to Turner’s God in the divine comedy. Tickets start at $85 with limited “Heavenly Seating” starting at $100. Learn More 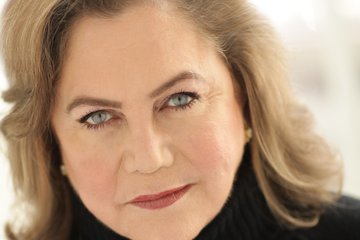 Legendary actress Kathleen Turner will star as God in the George Street Playhouse's comedy "An Act of God" by David Javerbaum, Nov. 28 - Dec. 23, 2017. Turner, an Academy Award nominee, Tony Award nominee, and multiple Golden Globe winner, has appeared in nearly three dozen films, including "The War of the Roses", "Prizzi’s Honor" (Golden Globe Winner), "Romancing the Stone", "Who Framed Roger Rabbit?", "Marley and Me" and many others. Learn More 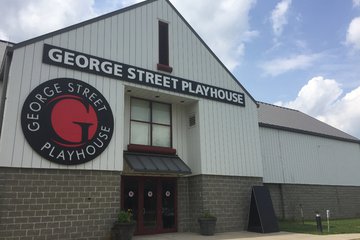 Build out of theatre begins and signage installed at 103 College Farm Road. Subscriptions and Flex Passes are on sale now for the upcoming 5-play season, with single tickets going on sale in August. Learn More 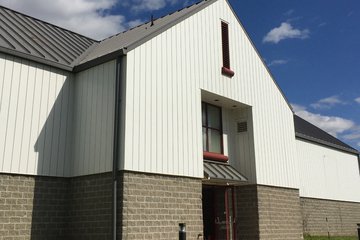 An updated version of the hit off-Broadway show "I Love You, You're Perfect, Now Change" – with book and lyrics by George Street Playhouse favorite Joe DiPietro and music by Jimmy Roberts — opens the Playhouse's 2017-18 season at an interim venue on Rutgers University's Cook Campus. Learn More