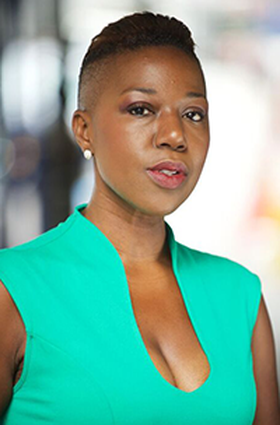 Laiona Michelle added writer to her resume with her double bill as writer and star of the critical and box-office smash, Little Girl Blue, The Nina Simone Musical, which launched its world premiere engagement at the George Street Playhouse on Feb 1, 2019. Now, she takes on the mantle of book writer, for a new project, Mandela -- a musical based on Nelson Mandela’s life; from his days as a leading activist against Apartheid, to his imprisonment and eventual release to become the nation’s President.

Laiona Michelle began to gain national notoriety when she made her Broadway debut in 2015, in the musical, Amazing Grace, which opened at the Nederlander. Cast in the principal role of Nanna, a woman stolen away from her family by slave traders, she delivers one of the stand out musical moments of the play.

Laiona Michelle has been nominated for numerous awards including the Independent Reviewers of New England, Best Lead Actress award (2001, Stonewall Jackson’s House); and she is the recipient of the Barrymore and Carbonell Awards (2004, Constant Star); The NAACP Hollywood award (2005, Constant Star), and she was nominated for the Helen Hayes Award (2005, Yellowman). Television:  Lift, All My Children, Law & Order: SVU, Law & Order: Criminal Intent, The Blacklist, and Crashing, as well as Amazon’s Sneaky Pete. Special thanks to the George Street Playhouse for their love and support.