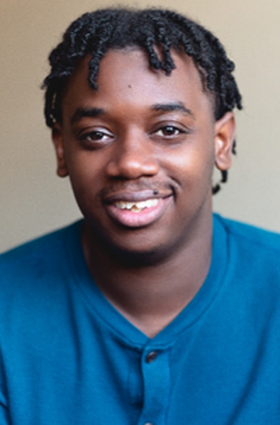 Jo’Siah Shan (They/Them) is a recent graduate from Norfolk State University’s Fine Arts program with a degree in Drama & Theatre. During their time at Norfolk State University, they served in a multitude of positions and productions presented by the award-winning and nationally recognized Norfolk State University Theatre Company. There they served as Music Director on a wide range of productions including The Color Purple (2018), Once on this Island (2019), A Musical Tribute to Motown (2019), for which they also originated the orchestrations and arrangements, and a host of others including the annual Holiday production of Black Nativity, for which they also served as the Company’s first student director. Jo'Siah also performed as an actor in such productions as Choir Boy “Headmaster Marrow” (2019), and The Colored Museum “The Man” (2021). For these works they have been presented with numerous awards presented by NSU’s Theater Company including Best Music Direction (2018- 2020). In addition, Tyree was the Music Director of several  productions for the Virginia Stage Company. These productions include A Night at the Gala (2018), Santa Land Diaries (2019), William Shakespeare’s The Tempest (2019) & A Comedy of Errors (2021), and currently serves as Music Director for the workshop of The Earth Remembers, a new work that highlights the history of Hampton Roads, Virginia from the 17th century to the present.