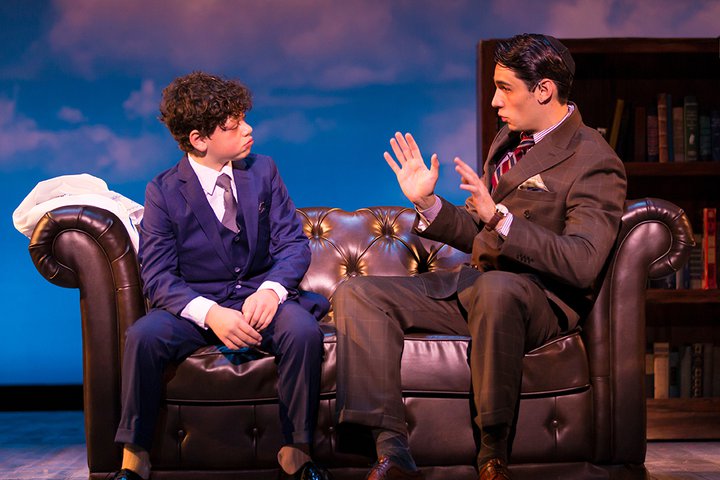 Some memories from childhood are better left in the past, but for the grown-up Joey Margolis, his childhood memories of his fantastic friendship with New York Giants baseball star Charlie Banks and Charlie’s long suffering girlfriend Hazel MacKay are wonderful to recall and are the substance of “Last Days of Summer,” the musical chosen to open the new season and the new home of New Brunswick’s George Street Playhouse. The show opened late last month for a run through Nov. 10.

The original George Street Playhouse, which actually was on George Street in an abandoned supermarket, opened 45 years ago but was replaced by a new home on Livingston Avenue in 1984 which survived until 2017, when the Playhouse moved temporarily to what had been the Agricultural Museum just outside the city. This year, a new facility, the New Brunswick Performing Arts Center, which houses not only GSP but also Crossroads Theatre, was completed. Under the continued leadership of artistic director David Saint and managing director Kelly Ryman, GSP has planned an ambitious inaugural season as well as continuing the projects of an education division for children, young people and adults.

The show, which boasts a script and lyrics by Steve Kluger on whose best-selling novel the show is based and a vibrant 1940s style score by Jason Howland whose musical “Little Women” was Tony nominated in 2005, has a cast of 16 to tell the story of young Joey Margolis whose major goal in 1942 was to make friends with superstar third baseman Charlie Banks. Joey (played by Julian Emile Lerner) and his best friend Craig (Parker Weathersbee) begin a relentless letter writing campaign to Banks (Bobby Conte Thornton), and when they seem to be getting nowhere, they start in on Charlie’s girlfriend, a nightclub singer named Hazel Mackay (Teal Wicks), and eventually they succeed. Joey sees Charlie as the father figure he hasn’t had since his parents’ divorce, and Charlie looks at Joey as the son he longs to have.