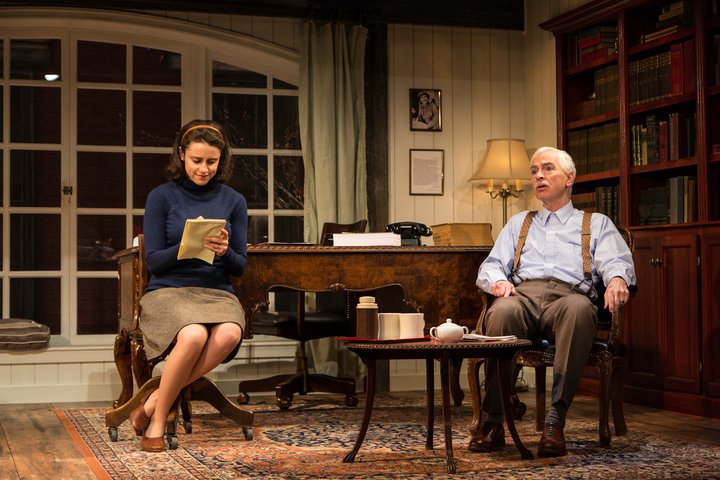 "An absorbing and ultimately, quite moving theatrical experience"

Francis Biddle — once attorney general of the United States, now an elderly retiree who spends his mornings writing his memoirs and answering queries from political scholars — is showing his new secretary, Sarah, around the office in his stately Georgetown home. When he gets to the bathroom, he tells her, “If you’re like all the others, you’ll go in there to cry.”

His tone is matter-of-fact. He knows he’s impossible to deal with. “Perhaps I won’t be like the all the others,” Sarah firmly responds.

And that’s the central conflict, in a nutshell, of this comedic drama, which is currently being presented at the George Street Playhouse in New Brunswick, with direction by Jim Jack. Biddle is monumentally cranky and stubborn. Will he successfully intimidate nice, eager-to-please Sarah, or will Sarah manage to find a way to break through his imposing shell?

Most parents have said "Couldn't you just try?" to their reluctant children, but when one of the two characters in "Trying," the play by Joanna McClelland Glass directed by Jim Jack now running at New Brunswick's George Street Playhouse's "interim venue" through April 8, asks that question, the situation is vastly different.

There's no reluctant child here; there's real-life Francis Biddle (played by Philip Goodwin), a scholar, lawyer, judge and legal and political superstar who's trying to get another book written in 1967, a year that turns out to be the last year of his life. There's no parent here either; there's fictional Sarah (played by Carly Zien), his latest secretary who's been hired by Biddle's exasperated wife Katherine, a poet to whom Biddle has been married for 50 years, in a desperate attempt to get him the help he needs to complete the perhaps unrealistic task he's set himself.

“Trying” paints a poignant picture of a cross-generational friendship​​​​​​​

The word “trying” has many definitions. It can mean testing the limits of, as in “trying one’s patience.” It can be coming to grips with the unfamiliar; it can mean attempting; or it could mean reaching a judgement, as when a case is tried in court. All of these meanings are displayed in Trying, currently being presented by the George Street Playhouse in New Brunswick.

GSP's "Trying" Is More Relevant Than Ever (with audio interview)

"A lot to cherish"

REVIEW: ‘Trying’ a Tender and Touching Story Of Relationships​​​​​​​

In the midst of all the nor’easters hitting New Jersey, George Street Playhouse continues to offer theater goers a reason to get out of the house! Their latest offering, Trying, is a tender and touching portrayal of two people dealing with each other in the midst of critical points in their lives.

Okay. I’ll admit it: I do love a play about historical events. Drama, comedy, dramedy—it doesn’t matter. And if it involves a battle of wills, then so much the better!

That’s why I was looking forward to reviewing George Street Playhouse’s production of Trying, Joanna McClelland Glass’s two-character play about the time she spent as a young assistant to 81-year-old, ailing Francis Biddle, Chief Judge at the Nuremberg Trials (Spencer Tracey played him in Judgment at Nuremberg) and Attorney General under FDR, among his many government positions.

As Judge Francis Biddle’s personal secretary, Joanna McClelland Glass spent the last year of his life crossing swords with the great man. Her play “Trying,” at George Street Playhouse in New Brunswick through April 8, is a semi-autobiographical account of their relationship, which developed as the two endured each other’s company.

This play doesn’t delve deeply into one historic figure in his later years; rather it rubs together two characters from different social strata and different life stages to see what sparks will fly. And fly they do.

"An absorbing and entertaining portrayal of a moving encounter"

Francis Biddle looked back on a career in law and government that has seldom been surpassed, but he didn’t always look back with contentment. The reason for his disquiet emerges in “Trying,” a touching, funny play by Joanna Glass, who was Biddle’s last personal assistant before his death in 1968.

Mom's view: Trying is the story of the relationship of Judge Francis Biddle and his secretary. Although in the play the character is named Sarah, the story is actually based on the true story of the playwright, Joanna McClelland Glass who worked  for a time as the secretary to Judge Biddle, who was the Chief Judge at the Nuremburg trials and was also know as a major opponent of the Japanese interment camps during World War II.

You don’t need to know history to enjoy “Trying,” a two-person play at the George Street Playhouse in New Brunswick that examines the final year of Judge Francis Biddle’s life through the eyes of his 25-year-old secretary. The compelling and often humorous story, based on playwright Joanna McClelland Glass’s own experiences as Biddle’s secretary from 1967 to 1968, stands on its own as a combative, “Odd Couple”-esque relationship between a cantankerous old man of great wealth and accomplishment and the working-class young woman tasked with organizing his literary affairs. But the play might have an added appeal for local history buffs, given the Biddle family’s Burlington County roots.

"An outstanding, moving play that brings together history and humanity"

BWW Review: TRYING at George Street Playhouse is a Must-See Play that Brings Together History and Humanity

"Sarah, when you're in your persistent mood, the flies leave the room." By Judge Francis Biddle in Trying

George Street Playhouse (GSP) is now presentingTrying by Joanna McClelland Glass through April 8. Directed by Jim Jack, the show stars Philip Goodwin and Carly Zien. This is a two-hander like no other. Exquisitely written, creatively staged, and with superb acting, Trying makes a lasting impression. It is an outstanding, moving play that brings together history and humanity.

"Magnificent...the ideal Spring gift for those you love"

Part of the joy of a great play is watching the actors spin out the layers of human relationships. Jim Jack’s direction puts the frictive sparks and the dry tinder in the places they need to be. There is no drama without conflict, and here there are plenty of both.

"Goodwin is impressive. Zien is a delight"

REVIEW: A Nuremberg Judge Looks Back: A Play About Attorney General Francis Biddle and His Secretary

You have to grit your teeth at Francis Biddle, 81, the former Attorney General of the United States under Franklin Roosevelt and chief American judge at the Nuremberg trials, when you first see him in the play Trying, that just opened at the George Street Playhouse in New Brunswick, N.J. He is such a stodgy old curmudgeon. He has a new secretary, Sarah, the latest in a long string of them, to help him answer his mail and write his memoirs. He is condescending to her, makes fun of her, berates her, barks at her in the morning and yells at her in the afternoon. He tells her he can’t be bothered with her marital problems or emotional troubles, does not want to hear any complaints from her and needs her to do a million things for him, usually all at the same time.

"The play is poignant and warm"

Biddle, a Harvard educated lawyer, served under Franklin Roosevelt and later Harry Truman during the Nuremberg Tribunal. His memories expand in this taut, beautifully written account of his final year of life. His assistant is a young Canadian woman who has taken this part-time job in Washington, DC.

The playwright, Joanna McClelland Glass, is from Canada and, indeed, did work for Judge Biddle during his final days. The play is poignant and warm, pitting youth against age, male against female, past against present and Ivy League snobbery against public education. There’s plenty of opportunity for conflict during periods of sly, witty exchange, revealing a basic humanity and mutual admiration at the end.

Playwright Joanna McClelland Glass has a story to tell. In her 20s, she was hired by former Attorney General Francis Biddle to help him finish his memoirs.  That in itself could make for a fascinating tale, but the real story comes from building a relationship with someone who was once one of the most powerful men in the world.  The two engaged in a battle of wits with the young woman more than holding her own.  Her story is told in Trying, the latest production at George Street Playhouse.

A Curtain Up NJ Review: “Trying”

How can the spunky 25 year-old secretary Sarah Schorr (Carly Zien) hold on to her job while standing up to the verbal slings and arrows shot at her by the cantankerous 81 year-old Judge Francis Biddle (Philip Goodwin)? After all, she is the latest in a string of secretaries presumably deemed unacceptable by the semi-retired judge. The answer comes soon enough in this sweet, winning semi-autobiographical play that follows the sometimes rocky daily working relationship between the self-educated young woman and the erudite judge.

George Street Playhouse (GSP) is now presentingTrying by Joanna McClelland Glass. It will be on stage March 13 to April 8. The poignant drama will be directed by Jim Jack, who is helming his second GSP mainstage production following the widely acclaimed 2016 production of My Name is Asher Lev. The show stars Philip Goodwin and Carly Zien...Broadwayworld.com had the pleasure of interviewing Carly Zien who plays Sarah inTrying. She shared with us some interesting thoughts about her career and the upcoming show.