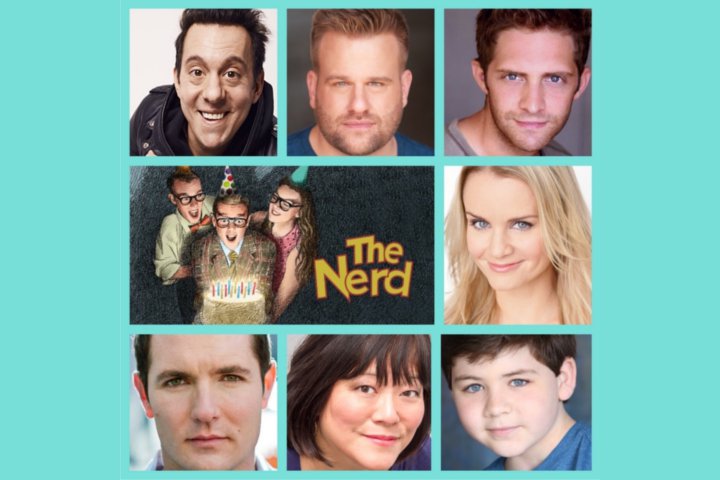 Kevin Cahoon, who has appeared in many Broadway productions, including The Wedding Singer and The Lion King, will direct the popular comedy, which closes out GSP’s mainstage season.

The Nerd takes place during Willum’s (Hanlon) birthday party, which gets a jolt of hilarious excitement when Rick Steadman (Kite), a fellow ex-soldier who saved Willum's life, stops by for a visit. Upon realizing that Rick will overstay his welcome with a vengeance, Willum puts together an outrageous plan to rid himself of this wacky GI who came to dinner. It’s a rollicking farce from the author of the award-winning comedy The Foreigner.

Ann Harada (Clelia Waldgrave) played Christmas Eve in the Broadway and West End productions of Avenue Q and stepsister Charlotte in Rodgers+Hammerstein’s Cinderella. Other Broadway: Madame Thenardier in Les Miserables (Revival), 9 to 5, Seussical the Musical, and M. Butterfly.  Film credits include Sisters, Trouble, Youth in Oregon, Admission, Hope Springs, Feel, and Happiness. She has appeared in the television series Smash (as Linda, the Stage Manager), Lipstick Jungle, 30 Rock, Doubt, The Good Wife, House of Cards, Master of None, The Jim Gaffigan Show and Search Party.

Colin Hanlon (Willum Cubbert) returns to George Street Playhouse, where he played Jon in 2004's Tick, Tick...Boom! He has also appeared in the Falsettos revival, In Transit, and Rent on Broadway. Hanlon also played Fiyero in the first national tour of Wicked. He played Adam in the New York premiere of Dot by Colman Domingo, directed by Susan Stroman (Vineyard Theatre). Hanlon was in the original casts of I Love You Because and Edges. He played Pete in the world premiere of The 12 by Robert Schenkkan and Neil Berg (Denver Center for the Performing Arts Theatre Company) and Luke in the regional premiere of Next Fall at The Repertory Theatre of St. Louis. Hanlon’s television credits include Steven on the Emmy Award-winning Modern Family on ABC, Difficult People on Hulu, and The Sinner on USA Network. He also starred in and produced Submissions Only.

Jonathan Kite (Rick Steadman) is best known as Oleg, the hilarious, sex-crazed Ukrainian cook opposite Kat Dennings and Beth Behrs in the CBS comedy hit 2 Broke Girls. Kite appeared in more than 100 episodes of the Emmy Award-nominated comedy. Kite also does voice work for animated series, such as Adult Swim’s Black Dynamite, and FOX’s Family Guy and American Dad. He is an expert impressionist, boasting over 100 celebrity impressions.

Kate Reinders (Tansy McGinnis) has appeared on Broadway in Something Rotten!, Wicked, Gypsy (with Bernadette Peters, directed by Sam Mendes), Good Vibrations, Into the Woods (2002 revival), and The Adventures of Tom Sawyer. Her regional theatre credits include Party Come Here (Williamstown Theatre Festival), Nerds (New York Stage & Film), Hair (Bay Street). Reinders was a series regular on Work It (ABC) and Sherri (Lifetime), and a guest star on Anger Management, Modern Family, and Ugly Betty. She has appeared in the films Russell Madness, Grudge Match, Such Good People, Certainty, and Kinsey. Reinders is also part of the singing/songwriting duo TASTiSKANK (with Sarah Litzsinger), recipient of the 2007 Breakout Award at the HBO Comedy Arts Festival).

Zach Shaffer (Axel Hammond) has appeared in Who’s Afraid of Virginia Woolf? (u/s Nick), A View From The Bridge, and The Man Who Came to Dinner on Broadway. Other New York credits include Taking Care of Baby (MTC), The Wii Plays, Playlist (Ars Nova) Mine, Brown, Love is Deaf (EST), Down the Drain, Til the Rapture Comes. Regional theater includes shows at Guthrie Theater, Hartford Stage, Portland Center Stage, etc. His film and television credits include Smash, Chicago Justice (NBC), Salt (Columbia Pictures), Black Box, Strangers With Candy, The Black Donnellys, Six Feet Under, XX/XY, Law & Order, Gayby. Shaffer also co-directed and produced the documentary Squeezebox!, which premiered at the Tribeca Film Festival before going on to tour film festivals around the world.

Stephen Wallem (Waldrock Waldgrave) is a SAG Award-nominated actor best known as Thor Lundgren for seven seasons on the Emmy-winning Showtime series Nurse Jackie. He worked as a stage actor and After Dark Award-winning cabaret singer in Chicago before moving to New York to make his television debut on Nurse Jackie. Other appearances include Randall in Horace and Pete and Chad in Difficult People. His performance in Bedroom Secrets earned him the 2014 Fringe NYC Overall Excellence in Acting Award. He also teamed with Edie Falco for a sold-out run of the original cabaret The Other Steve and Edie at the Laurie Beechman Theatre. Chicago Cabaret Professionals named Stephen their National Honoree for 2014. National tours include Forever Plaid, Into the Woods, and Scrooge starring Richard Chamberlain.

Hayden Bercy (Thor Waldgrave) has appeared as Flick in the National Tour of A Christmas Story, The Musical and as Ben in the Radio City Christmas Spectacular. Other theatre credits include Young Tommy in The Who’s Tommy and Newsboy in Gypsy (Count Basie Theatre). TV/film appearances include Pandora’s Box, Wonderama, Boss Level and I’m The Parent.

Larry Shue (Playwright) was the author of The Nerd, which ran successfully on Broadway with a National Tour and many productions overseas. His play Wenceslas Square was performed off-Broadway at the New York Shakespeare Festival. Wenceslas Square is part of Best Play of 1987-1988, published by Dodd, Mead and Company. He also wrote The Foreigner, which, following a record-breaking run of 700 performances at New York’s Astor Place Theatre, was produced successfully internationally.

Tickets start at $44 for Preview performances. Student tickets are $15. To purchase tickets or for more information, visit the George Street Playhouse website at www.GeorgeStreetPlayhouse.org, or call the box office at 732-246-7717.  Groups of 10 more receive additional discounts.  For information about bringing a group to the Playhouse, call 732-846-2895 ext. 134, or visit GeorgeStreetPlayhouse.org/grou<wbr/>ps. 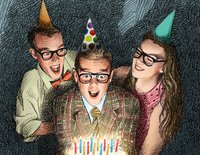 Willum’s birthday party gets a jolt of hilarious excitement when Rick Steadman, a fellow ex-soldier who saved Willum's life, stops by for a visit. When he realizes that Rick is socially inept and will overstay his welcome with a vengeance, Willum must put together an outrageous plan to rid himself of this wacky GI who came to dinner. A rollicking farce from the author of the award-winning comedy The Foreigner.