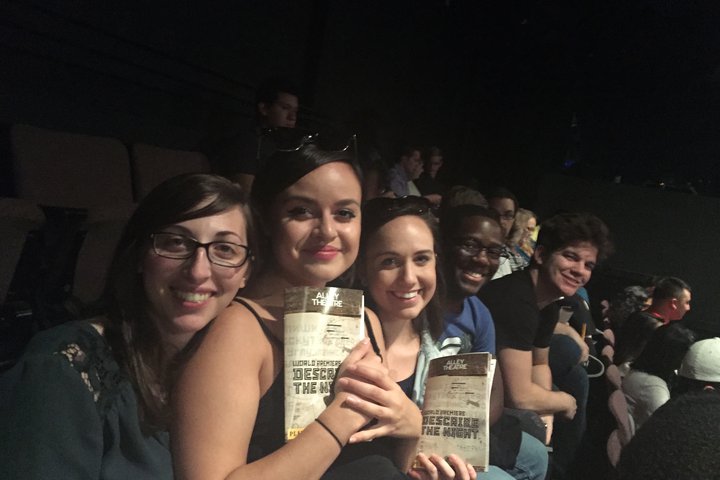 Above: The Austin the Unstoppable touring company  — (L to R) Erica Leigh, Katie Lugo, Carol Foose, Danté Anderson and Mason Butler — attend the Alley Theatre's production of Describe the Night, which is being performed at the University of Houston's Quintero Theatre as the Alley Theatre continues to recover from damage sustained during Hurricane Harvey.

NOTE: Carol Foose, a 2016-17 GSP Educational Touring Theatre cast member, has returned this season to join the cast of Austin the Unstoppable, which is currently touring Houston schools and organizations through a grant provided by Novo Nordisk in conjunction with its Changing Cities Diabetes program. During the next few weeks, we will be sharing Carol's thoughts from Houston as she chronicles her experiences on the tour. Below is the third installment.

As I begin to jot down some memories of the past week, I am baffled by the fact that we have only been in Houston for a short three weeks. Because of the generous, southern hospitality from our neighbors and the schools, Houston is beginning to feel like home. It feels as though we have been sharing the story of Austin the Unstoppable for months, and if I had my way, we’d be sharing it for months and months to come.

We had eight performances this week, bringing our total tally to 16 performances. Every performance takes on a different flavor because of the wonderful and vast differences in our audiences. The students never cease to amaze me, and their laughter is contagious.

Often during the post-play discussion, students will ask us how old we are. They scream in surprise when they find out we are all recent college graduates as they so firmly believe we are the age of our characters. This week, I celebrated my 25th birthday. Despite the early morning call-times (my alarm was set as early as 4:45am this week), heavy lifting when loading and building the set, and constant running during the performances, I feel as though I am aging backwards. I am happy to inspire students with the story of Austin the Unstoppable. but I cannot deny the immense amount of inspiration the students give me in return. Seeing their energy makes me crave a childlike joy, and striving for that joy definitely keeps me young.

On Thursday evening, we ventured to the University of Houston to see the Alley Theater’s world premiere production of Rajiv Joseph’s Describe the Night. This poignant new play dealt with the importance of words and truth while weaving through the stories and relationships that connected seven characters through myths and conspiracy theories.  The play will have it’s New York premiere at the Atlantic Theater Company, beginning performances on November 10.  The Alley Theater was devastated by Hurricane Harvey’s floods, and though it is now six weeks after the storm, the theater remains without power.  Theater, for me, is sacred.  I feel so deeply for those artists who watched their home away from home wash away in the storm, but am incredibly inspired by the company’s determination to provide the community with meaningful new stories. Though a currently “homeless” theater company, The Alley Theater takes the phrase “the show must go on” very seriously.

In the spirit of exploring Houston’s art, we went to the Miller Outdoor Theater on Sunday evening to see the Houston Symphony playing some of our favorite spooky tunes at the Symphonic Spooktacular. The theater holds a variety of events and performances every week that are completely free to the public! I sat there, surrounded by thousands of people, very thankful for art that is accessible to the public!

Katie and I revisited BARC this week. Ashley, the volunteer coordinator, said that the animal shelter has definitely grown in volunteer power since Hurricane Harvey. I have found that walking the dogs is a wonderful way for me to multi-task as I am able to volunteer and exercise at the same time. The exercise is definitely important as I have continued to eat my fill of delicious Texas barbecue.

We have another eight shows this week!  Eight more exciting chances to lead a healthier life and hopefully inspire others to do the same! 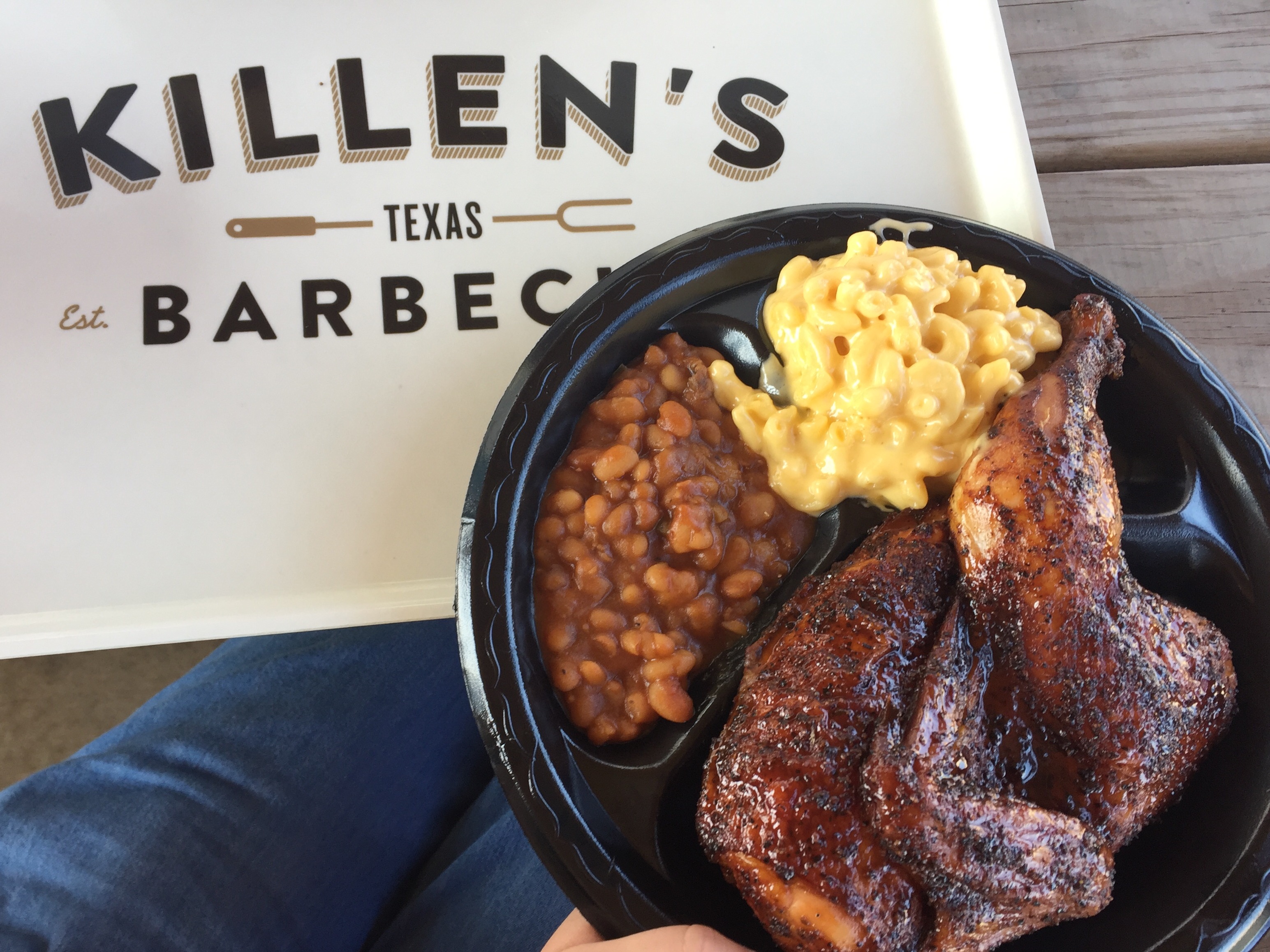 A delicious lunch from Killen’s Barbecue! On a scale of 1-10, I give this BBQ an 11! Easily the best I’ve had since being in Houston. 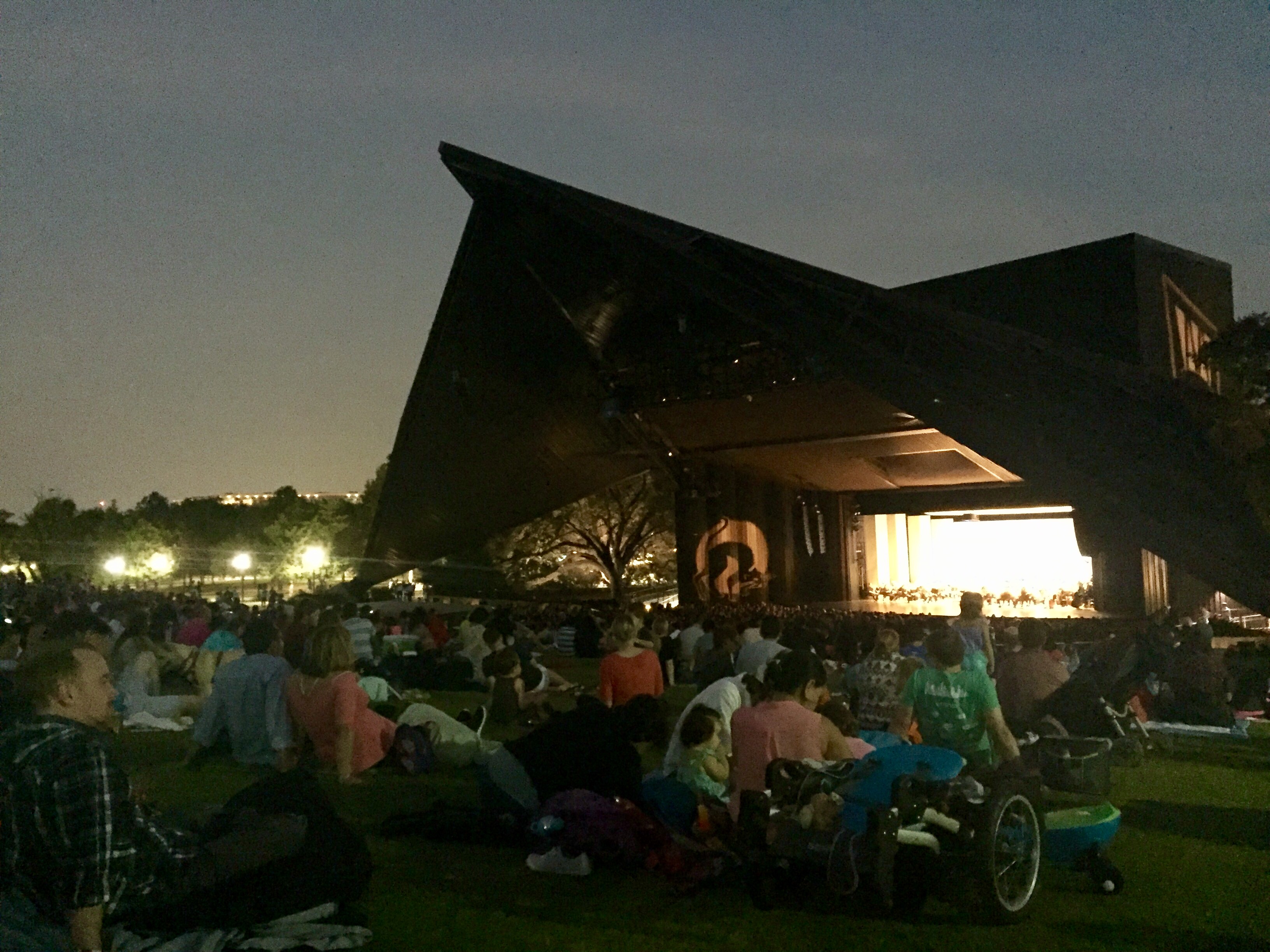 The Symphonic Spooktacular at the Miller Outdoor Theater. 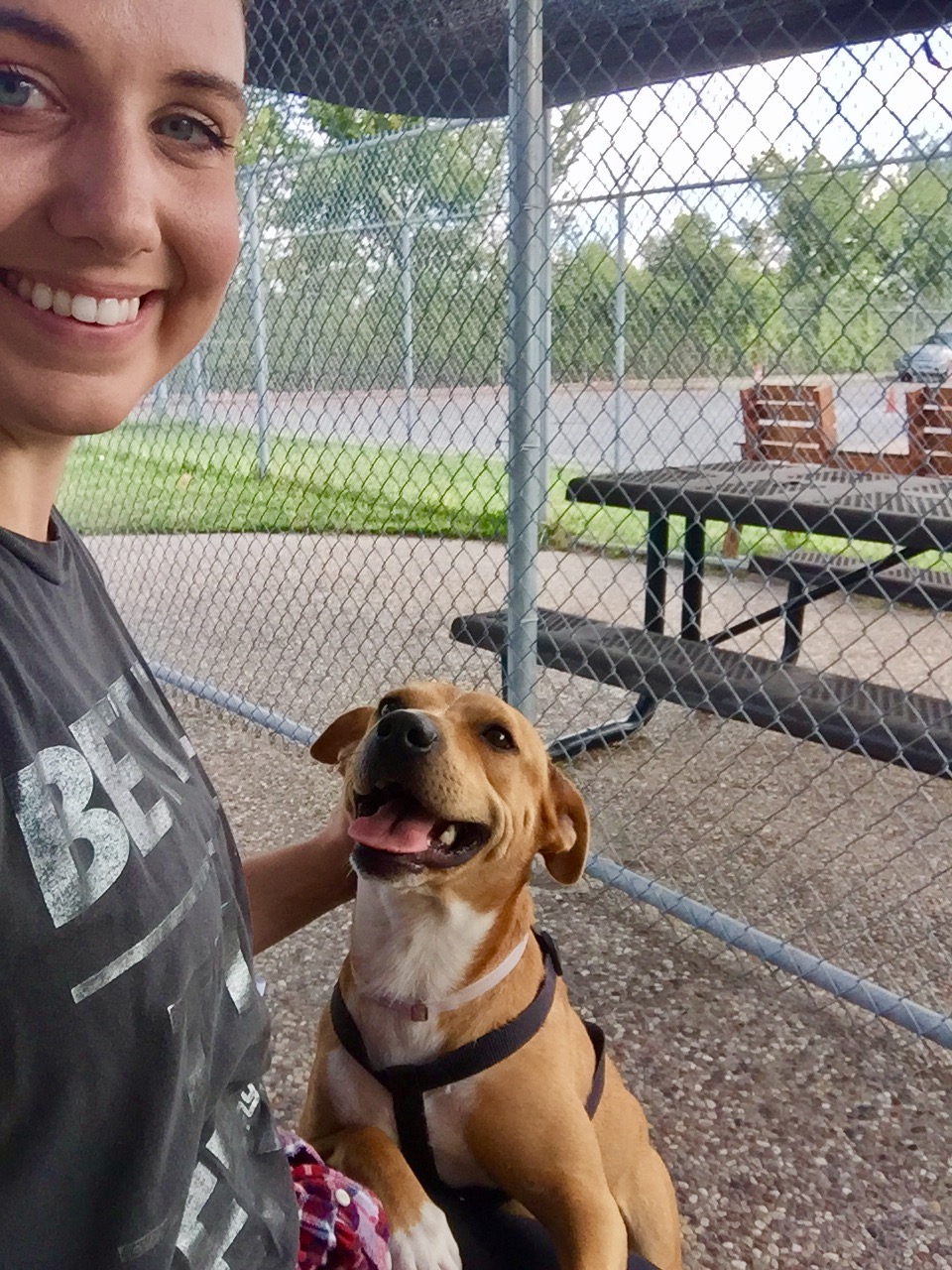 Meet Milo - one of my favorite furry friends I met at BARC! This friendly pup was brought to the shelter after Hurricane Harvey and was finally adopted on October 14! Congratulations, Milo! 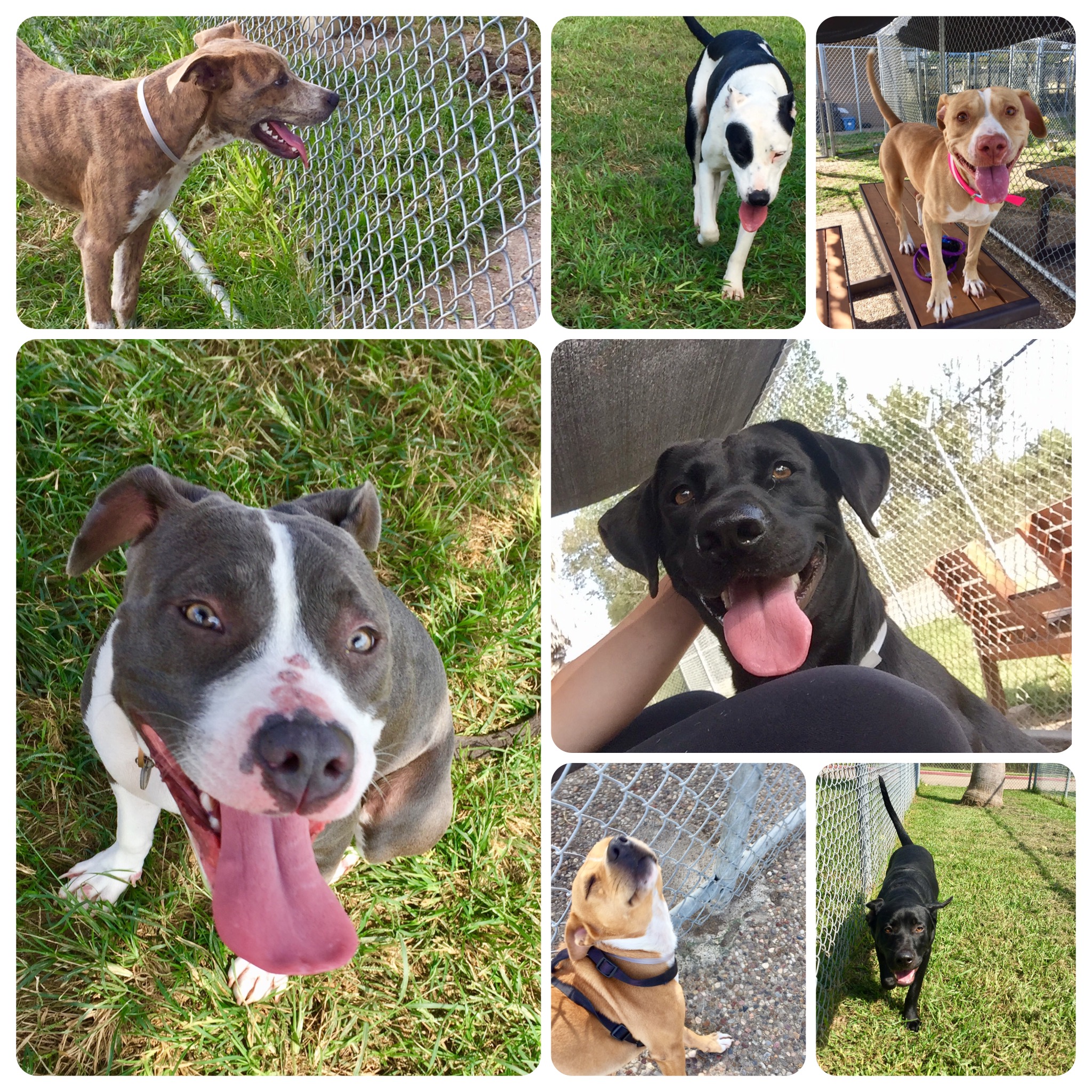 Meet Tracy, Oreo, Kana, Babe, Maggie, Milo, and Cocoa - some of the many smiling doggies Carol and Katie met while volunteering at BARC.

While looking for Halloween costumes at Target, stage manager Erica becomes one of our favorite temptations! 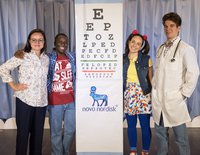 George Street Playhouse’s Educational Touring Theatre, courtesy of a grant from Novo Nordisk, is bringing its musical comedy "Austin the Unstoppable" to the Houston Independent School District and faith-based organizations in Houston this fall. "Austin the Unstoppable" in Houston is supported by a grant from Novo Nordisk, a global leader in diabetes care.