Read the full story on MyCentralJersey.com

NEW BRUNSWICK - George Street Playhouse has won the $7.75 million race to name the two theaters of the $172 million New Brunswick Performing Arts Center, which will open on Sept. 4 with a celebration.

They will be named in honor of their two largest-ever gifts: $5 million from Elizabeth Ross Johnson Charitable Trust and $2.75 from the Laurents/Hatcher Foundation.

“Their daughter died unexpectedly,” said David Saint, George Street’s artistic director since 1998. “Betty has been a great support of George Street over the years. The theater generously is named after their daughter who passed away and always loved the theater.”

The NBPAC has named its two theaters in honor of the largest gifts ever made to George Street Playhouse.

Saint also is the president of the The Laurents/Hatcher Foundation, which was founded by Arthur Laurents, librettist of the Tony-winning musicals “West Side Story,” “Gypsy” and “La Cage aux Folles,” and his partner of 53 years, Tom Hatcher.

Saint said he is delighted that the performing arts center’s 259-seat venue will be named after his mentor and frequent collaborator.

“It means the world the to me,” he said. “Arthur gave me so much in theater and life, so it’s personally a great satisfaction knowing that he wrote about George Street as his artistic home. He considered this theater to be his favorite anywhere. Personally, it’s very gratifying to know his name will be there forever connected to the theater.

“Professionally, it’s great because George Street will be doing new shows next year that will be announced soon with high-profile Broadway people,” Saint continued. “They all have such respect for Arthur. Also, within the next two years, Arthur Laurents will be over the country in high-profile projects that will coincide with the opening of the theater.” 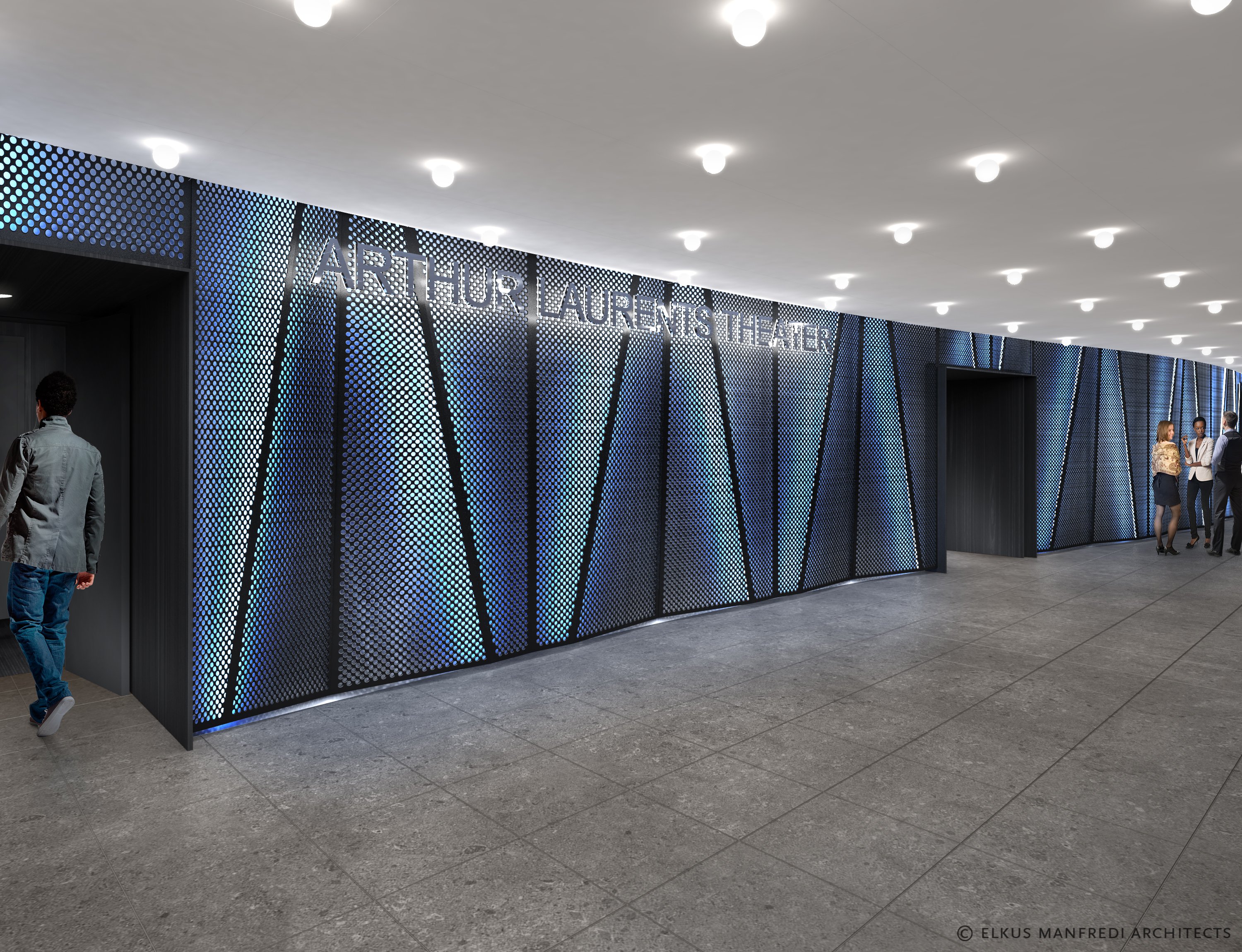 Those projects include Steven Spielberg’s film remake of “West Side Story,” which starts filming in June with Saint as a consultant; a movie version of “Gypsy,” Broadway revivals of both, and a Tokyo production of “West Side Story” that Saint is directing, along with Laurents’ “The Turning Point.”

Funding for the project stems from public and private entities, including $6 million from the county and $40 million raised by state tax credits. The public-private partnership also includes the City of New Brunswick, Rutgers, the state Economic Development Authority, New Brunswick Cultural Center, Pennrose, New Brunswick Parking Authority and 11 other groups and organizations.

“We are currently in the market for naming rights to the building,” Paladino said, “and that money will be used to support operations over a long period of time.”

Saint said he is happy that for the first-time in its 45-year history, George Street Playhouse will have a home in a space that was designed for theater rather than retrofitted. Other venues have included a former supermarket, YMCA and agricultural museum, its current space on Rutgers’ Cook campus.

Paladino said he is excited that the arts center will add to New Brunswick’s vibrant nightlife by accommodating a variety of daily performances by resident companies, as well as productions that lease the venues. A scenery fly loft and two stage-size rehearsal rooms will accommodate a full schedule, Paladino said.

“We expect 80,000 people to come to the theater in the first year, adding to the several hundred thousand coming to the State Theatre,” he said. “We are able to claim New Brunswick as a cultural hub not just for the region but statewide. This building is designed for its four companies to be very aggressive working in the same amount of space that two companies used to work in. We have 314 performances already on the books for the ’19-‘20 and have dates that need to be filled.

“We will bring Crossroads back to its glory, introduce Mason Gross programs that will allow students to work with equity actors and dancers, and enable American Repertory Ballet to have a complete season in place, which they’ve never had the luxury to do,” Paladino continued. “It really does bolster the entire arts environment in the city … and will bring more people to New Brunswick for dinner, for drinks after shows, making New Brunswick and exciting and enjoyable place.”

The arts center is being constructed on the former sites of George Street Playhouse and Crossroads Theatre Co. on Livingston Avenue. The inaugural season will kick off with an opening celebration on Sept. 4, followed two days later in the Arthur Laurents Theatre by Crossroads' production of “Robeson,” a musical bio of Rutgers great Paul Robeson, Paladino said.

On. Sept. 10, Mason Gross School of Dance will be presented in the Elizabeth Ross Johnson Theatre, he said. On Sept. 21, American Repertory Ballet will take the Johnson stage, Paladino said. A Rutgers theater production and symphony performance also will be staged there with the arts center’s first month of operation, he said.

George Street will open its season in the Laurents Theatre in on Oct. 15, spokesman Matthew Holowienka said. Schedules for the arts center and its resident companies will be announced soon, Paladino said.

In addition to the arts center, the 23-story mixed-use propertywill include 207 residential units, 20 percent of which will offer affordable housing, largely for performing and visual artists, Paladino said. The project also includes a parking garage and15,000-square-feet of office space for the resident companies and other tenants, he said.